Prostate Cancer UK and the NHS have joined forces to launch a campaign this week called 'find the missing men' - to find the 14,000 men who have not started treatment for prostate cancer since the beginning of the pandemic. Prostate cancer is the most common cancer in men, with 1 in 8 men diagnosed with prostate cancer. So that could be a dad, uncle, brother, partner or best friend.

Prostate cancer is very treatable if caught early, so it’s vitally important that these men are found quickly before their cancer spreads. We’ll share our urgent message on TV, billboards, bus stops and newspapers across the UK, but we won’t find the 14,000 without people like you sharing our checker with your loved ones, friends and colleagues. 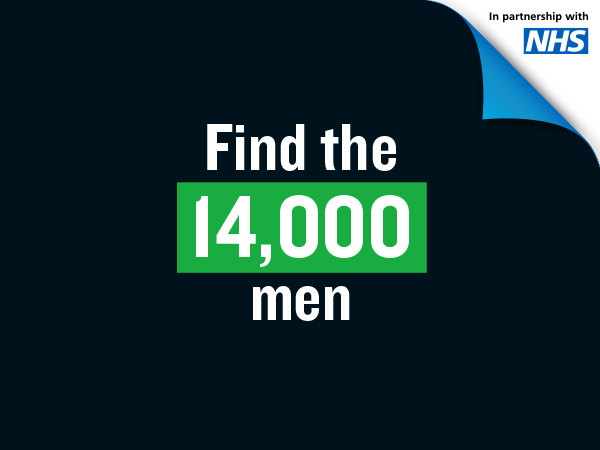 According to NHS England data released this week, prostate cancer accounts for a third of those not treated for cancer compared to before the pandemic. Referrals and treatments for prostate cancer dropped significantly during the pandemic, with men less likely to visit their GP and discuss prostate cancer. Previous NHS research found that half of people would delay coming forward to their GP during the height of the pandemic because they didn’t want to burden the health service.

Although referrals and treatment levels for most other cancers have now recovered or even risen above pre-pandemic levels, the number of missing prostate cancer diagnoses is growing. This is compounded by the fact that early prostate cancer rarely has symptoms that would prompt men to visit their GP.

The prognosis for the patients we’re yet to see should still be positive, but we do need to see them as soon as possible. It’s important men understand prostate cancer often doesn’t show any symptoms at an early stage, so don’t wait – check your risk now.

We must act now. Without urgent action, the number of men with undiagnosed prostate cancer will keep growing.  Together, we can help thousands more men to have vital conversations with their GP.

We’ve done it before. When Stephen Fry and Bill Turnbull shared their stories of a prostate cancer diagnosis in early 2018, our supporters rallied together to amplify their message. ‘The Fry-Turnbull effect’ led to thousands more men diagnosed, and prostate cancer overtook breast cancer as the most commonly diagnosed in the UK. A huge proportion of these men caught the cancer early, before it spread.

We need to do this again, and we need your help. Please help our dads, sons, brothers and friends get the treatment they urgently need. Join the campaign to find the 14,000 men

Alongside our nationwide print and TV campaign, some familiar faces have joined the call for everyone to take and share our risk checker.

Actor, comedian and writer, Stephen Fry, was diagnosed with prostate cancer in 2017 after a routine health check. He knows the urgency of the situation, and the power of collective efforts, saying:

“As you can imagine, I was pretty knocked back when I received a diagnosis of prostate cancer, particularly as I had no symptoms to indicate anything was wrong – something I later learned is very common. Thankfully it was caught early, making it more treatable.

“I’d urge you to check your risk and speak to your GP if you have any concerns – even if you feel completely well, as I did. Prostate Cancer UK’s risk checker can help you understand your risk and the next steps to take.”

Competitive athlete and sprint hurdles masters champion, Joe Appiah, was diagnosed with prostate cancer in July 2021 aged 51, after a close friend encouraged him to speak to his doctor. He had no symptoms and no idea that black men were at higher risk. Fortunately his cancer was caught early and he was able to have surgery to remove the prostate. He credits his friend for saving his life and is now taking the opportunity to raise awareness and educate as many close friends and family as possible.

Joe says: "I'd seen adverts about prostate cancer, but I didn't know how badly black men were affected, or how to get a test. I didn't have symptoms and wasn't aware of any family history. So until my friend told me to get tested, I didn't think about it – especially with Covid too.

My friend saved my life. Thanks to him it was caught just in time, when it was still in the prostate. My doctor told me it was ready to escape. If I'd waited a year down the line, until I got symptoms, things would have been very different.

"Before I had prostate cancer, I didn't know black men were at higher risk. No one discusses these things, especially in the African community. After I was diagnosed, I found out two of my uncles died from prostate cancer – but no one talked about it.We need to take ownership and talk about it openly, so the next generation can protect themselves. That's why I’m sharing my story and why I’d encourage all men to check their risk.”

Although thousands of men are still being treated each month, if things don’t change soon, the number of men with undiagnosed prostate cancer will continue to grow. Men have been telling us they haven’t wanted to “bother” their GP during the pandemic – particularly if they don’t have any symptoms, which is the case for most men with early prostate cancer.  If you're over 50, if you’re black, or if your dad or brother had it, you're at even greater risk, so it’s important you don’t wait before you act.

We’re in a challenging situation but together we know we can change it. Will you help to find the 14,000 men and help give the treatment they urgently need?