Having a good life

We talked to Fiona Carey, a member of our Patients Advisory Board, about her diagnosis and living with renal cancer.

Renal cancer is also known as kidney cancer, and is one of the most common types of cancer in the UK, there are often no obvious symptoms but they may include: blood in your pee, persistent pain in your lower back or side, and/or a lump or swelling in your side.

The main treatments are: surgery - to remove part or all of the affected kidney, cryotherapy or radiofrequency ablation - to destroy cancerous cells by heating or freezing, embolisation - to cut off the blood supply to the cancer, and radiotherapy - using radiation to target cancer cells and relieve symptoms.

Fiona said: “I've had kidney cancer since 2001, and I've had a lot of surgery and many other treatments since then."

This has included a nephrectomy, a pulmonary metastatectomy (that is, a lung re-section) and a Whipple’s surgery for kidney cancer secondaries in the pancreas.

"I've got lots of scars, and a big one that's been open four times. (Yes, I should get a zip…). I’ve lost a lot of 'offal', including a kidney, my gall bladder, my duodenum, most of my pancreas and parts of my lung and stomach, as well as lots of smaller nuts and bolts! The Whipple’s surgery, in particular, changed my life fairly dramatically. It resulted in diabetes, poor nutritional absorption, early retirement in 2012 and very reduced mobility. There’s been a lot to manage."

Recurrences in 2016, 2018 and again in 2019 have seen Fiona undergo radiofrequency ablation, radiotherapy and further surgery.

“I can see that it all sounds a bit tragic: people see the wheelchair first, then see me sorting the diabetes… that I got because of cancer surgery! You can sometimes see them thinking ‘Oh my God!” But the weird thing is that, as anyone who knows me will attest, I have a really good, busy life, and lots of fun.

"Most of my life isn’t about cancer or its treatment. Since retiring, I’ve travelled with my husband and with friends at every opportunity; I play wheelchair basketball in the national league and train hard at least twice a week (I’m captain of one of the teams I play for). I’ve done a lot of photography, I’ve learnt bookbinding too, and during COVID-19 - in between sewing more than a dozen sets of scrubs for NHS staff - I’ve even taken up adaptive (seated) boxing."

"Cancer is hard, and  I wouldn't have volunteered for it. But it's led me to some amazing places, and to scores of amazing people. My life is no tragedy" 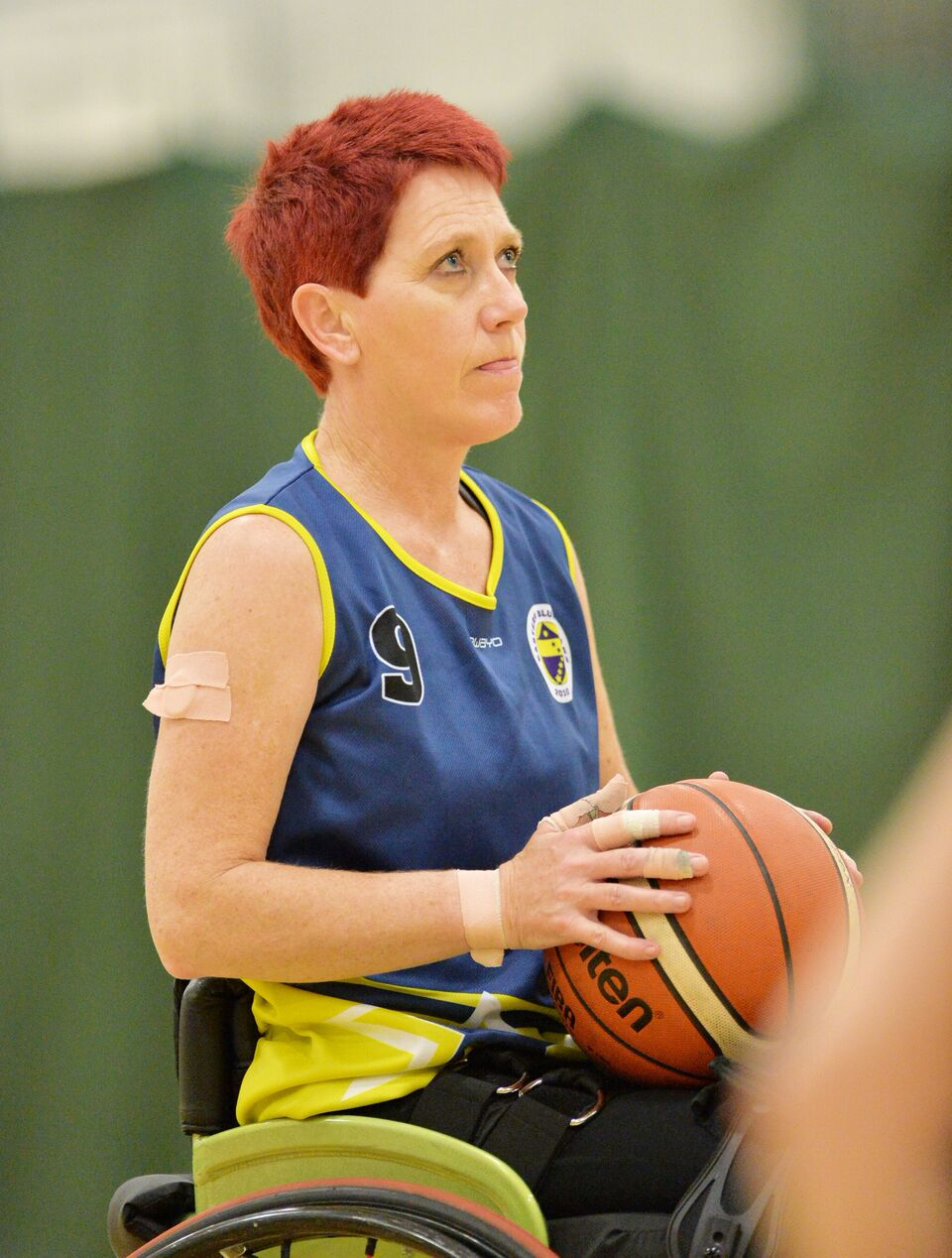 Other things keep her busy too. In 2012, after retiring, she ‘accidentally’ became a patient representative, and has done all sorts of interesting work. 'Rattling NHS cages’ locally, regionally and nationally. Fiona is regularly invited to speak about patient-centred care and co-production at conferences and expos.

“During Covid, I’ve been mainly busy with the Cancer Alliance, with Addenbrooke’s (where I’ve been involved with the Cambridge Cancer Research Hospital project since the beginning), and recently, with an oncology research project. There’s always a lot on the go.”

Nationally, Fiona helped design and develop NHS Citizen and chaired the Wheelchair Services Summit. She’s spoken at many conferences, and at Westminster. She was an expert adviser to the Department of Health and Social Care on the establishment of the Healthcare Safety Investigation Branch; and she was a founding member of the East of England Clinical Senate, the Coalition for Collaborative Care, the Q Initiative and the Wheelchair Leadership Alliance.