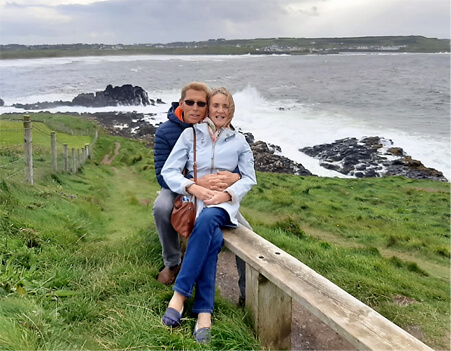 We talked to Trevor Smith a former Director of Facilities and Estates from Great Paxton, who is living with prostate cancer.

Trevor said: "I was diagnosed with prostate cancer on Christmas Eve 2013; my daughter attended hospital with me and on leaving the hospital, I broke down in tears not knowing what my future held. I was only 58 years old at the time and I remember thinking 'why me'?

"My other over-riding thought was that I had so much to live for and so much I still wanted to do with my life and with my family. The next few months were very emotional and surreal; I couldn't get the thought of this awful disease out of my head, it was the last thing I thought of when going to bed and the first thing I thought of when waking up. However, I quickly came to realise that, along with my treatment, a number of other points were very important - such as maintaining a positive attitude, family and friends, fitness and my faith.

"Although I am now retired, I am always very active; I continue to run twice a week and do weights/circuits twice a week as well as going for walks. There is well documented evidence that exercise helps fight cancer and for people with prostate cancer, 'core' exercises are particularly important. I am also kept busy (and happy) with my two wonderful grandchildren and do some voluntary work in our village shop. I also try to eat well (most of the time) and I have recently lost over a stone by following a Dr Michael Moseley diet.

"In 2012, I had accepted a challenge to run the Cambridge half marathon which was taking place in March 2013. Whilst doing marathon training in early 2013, on one occasion, I had heart palpitations of over 200 beats per minute which was diagnosed as SVT and resulted in my needing to have some minor operations on my heart. On attending my final consultation for this condition, I mentioned to the consultant that I was having difficulty urinating and that when I thought I had finished, I went again, thinking that my heart treatment was the cause. It was then that the consultant told me that this was a classic prostate condition - had I not had that conversation, I almost certainly would not be here now.

"My aim in publicising my story is to promote awareness of prostate cancer in the hope that more men are diagnosed early and will therefore have better outcomes. Because I knew nothing about the symptoms of prostate cancer, I was diagnosed "late" and my condition is therefore incurable because the cancer had already left my prostate and entered a lymph node. It is therefore VERY important that men (particularly over 50) know and understand the symptoms of prostate cancer - it remains the second biggest killer of men by cancer. It is also worth knowing that a healthy PSA Blood Test result is anywhere between 0 - 3; my PSA reading was initially 93.

"My main initial treatment was radiotherapy which lasted around four weeks, the effects of which were incredibly painful for around six weeks but I have never had any physical pain from cancer.

"Cancer has had a profound effect on me but I have learned to live with it and I once again have a very happy and contented life. Whilst it isn't curable, it is manageable through daily tablets and three - monthly injections. I also have three -monthly PSA Blood Tests - awaiting the results of these still makes me anxious. However, for some time now, my PSA Blood Test results have been less than 0.4 - if this can be maintained for another 30 years, I will be very happy indeed!

"My treatment has continued as normal at my GP surgery throughout COVID and other than wearing a mask, I've not noticed any difference with my treatment.

"Initial diagnosis of any cancer can be traumatic so you do need to be aware of what the various symptoms are; you could have one or several but the sooner you get checked, the better the outcome - and if you do have prostate cancer, like me, after the initial shock, it is a condition that can be managed for many people.

"Given the advances in medicine/treatment in recent years (and ongoing), I have often heard it said that 'people often die with cancer, not because of it'. Stay aware and stay alive - you only get one chance at life but if you do it right, once may well be enough."