What are health inequalities

Health inequalities are the preventable and unfair differences in health standards between populations and groups arising from unequal distribution of economic, social and environmental conditions. The impact of COVID has brought a sharper focus to pre- existing inequalities within the treatment and outcomes relating to cancer that at their most extreme can determine people’s chances of survival.

The East of England region has some areas of health inequality with varying experiences of cancer care, poorer outcomes of treatment and increased cancer incidence in some areas. These are linked to a variety of factors such as differing social-economic status, deprivation, ethnicity, age, gender, cancer type and geographical location.

Each of our integrated care systems and the hospital trusts within them have created plans as to how best to tackle health inequalities in their area. 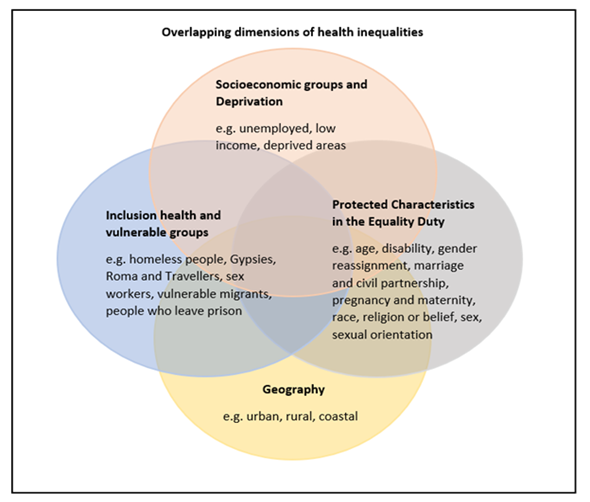 Deprivation is one of the most significant factors impacting on the numbers of people being diagnosed with cancer, as well as on cancer survival rates. Cancer Research UK estimates that if all socio-economic groups had the rates of incidence of the least deprived, then 19,200 deaths could be prevented across the UK. Find out more about deprivation and the link to health inequalities

Health inequalities can be measured by looking at patient experiences and patient feedback. The national patient experience survey shows a slightly less favourable experience of care reported by patients describing themselves as having black, Asian or mixed ethnicity. This has been seen over the past four years across both Alliances, by members of the BAME communities. ​​​​​​

Some of the areas in the region with the most ethnically diverse populations, such as Luton and Thurrock, are also found to have poorer outcomes following their cancer diagnosis.